The horse details can be found on the horse form tab.

Here you will find information relating to the horses: Name, Country, Age at the time of today’s race, foal date, colour, and sex and distance travelled to today’s race. In the example above you can see You Owe Me Money was 2 years old at the time of this race, having been foaled on 24 February 2018. She is a brown female that travelled 123 miles to race today.

The details below can be shown/hidden by clicking the blue header bar to see more information about the owner, trainer, jockey, and breeding of the horse.

Version 2 of the Online Race Guides introduced Horse Form, containing a Horse Details section which shows over 30 columns of information with over 50 data points for each run.

Each of these form lines can be filtered using the 18 different: time, horse, and race filters to enable you to more quickly identify the race conditions that may bring about the best performances from any runner.

The following guide will explain the information you will find in this section.

Here you will find information relating to the horses: Name, Country, Age at the time of today’s race, foal date, colour, and sex and distance travelled to today’s race. In the example above you can see You Owe Me Money was 2 years old at the time of this race, having been foaled on 24 February 2018. She is a brown female that travelled 123 miles to race today.

The section below, which can be shown/hidden by clicking the blue header bar shows details about the owner, trainer, jockey, and breeding of the horse.

The columns in the Horse Details section can be arranged however you like, with the ability to reorder, or hide any column as required. To do this, click Edit Columns in the Horse Details header section. There is a separate guide showing you how to arrange these columns. If that’s what you’re looking for you should search for it in the Learn More section of the website.

It is possible to sort the data in this section by any of the headers by clicking on the column header you want to sort by. A single click to sort Low to High, then a second click to sort High to Low. In columns with multiple data points, a click in that column’s header will reveal options for sorting by each of the different data points in that column. 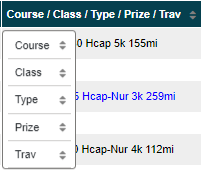 The date column shows the date of each prior run. If you hover your mouse over the date the tooltip will show you the Race Name and lettered Class (A – H). This column is ‘frozen’ to the left-hand side of the screen and won’t disappear as you scroll across the data.

The DR column shows the stall the horse was drawn in.

Hovering your mouse over the short name for the course will reveal the courses full name, travelling direction and characteristic in the tooltip.

The Dist column shows the rounded distance of the race. To see the full distance hover your mouse over the value.

The Gng column shows the Official Going for each prior race. The possible values are:

Hovering the mouse over the Gng value will reveal the full description of the Going in the tooltip.

The possible Headgear values include:

Where a Headgear entry is followed immediately by a number 1, this indicates that this Headgear was being worn for the first time. As in the above example, where the horse had worn blinkers for the first time whilst carrying eight stone and eight pounds.

This column shows the Official Rating (OR) the horse had in each prior race. Depending on results from each horses’ first three runs the OR may be 0 for up to the first three runs, as in the example above.

This column shows the Percent of Rivals Beaten (PRB) in each prior race. The colour shading is Green for Good, Amber for Moderate, and Red for Poor. The formula for PRB is

So in the above 3 examples:

This column shows the name of the Jockey and any claim they rode under in brackets after the name.

This column contains the name of the Trainer that prepared the horse for each race followed by that trainer’s 5-year PRB (or up to 5 years depending how long the trainer has been training horses under their own name).

The three percentages underneath the trainer’s name are the 14 day, 28 day ,and 56 day PRBs for that trainer. Again, the colour shading is Green for Good, Amber for Moderate, and Red for Poor.

This column is the Industry SP which can be shown in either Fractional or Decimal format. In brackets underneath the SP are the Evening (8.30pm), Breakfast (7.30am), and Morning (10.30am) prices for each horse. Between each price is either: a dash, showing the price didn’t change; a green arrow, showing the price reduced; or a red arrow showing the price increased.

To select your odds format preference, click on the settings cog in the Horse Details Header. 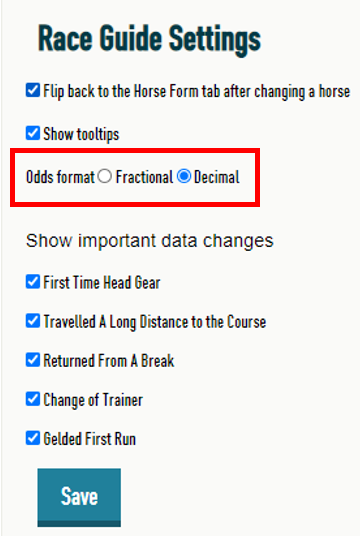 Then select your odds format (as above) and click Save. Close this window, return to the Race Guides and Refresh the page.

This column shows the Betfair Starting Price (BSP) of the horse in each prior race. In brackets underneath the BSP is the Betfair Place Starting Price (BPSP), which is the starting price in Betfair’s To Be Placed Market, where placing’s are determined by Betfair’s own rules (note: these do not always align with Industry Standard Place rules).

The colouring convention for these rows is:

This column shows the in-running prices traded on the Betfair exchange in line with Betfair’s High/Low traded rules which govern how much volume needs to be traded at any price point for it to be included (see Betfair’s website for details on in-running traded value rules).

The colouring convention for these rows is the same as the BSP (Place) column.

These eight columns allow you to compare each form line with today’s race very quickly. Four of the columns show a green tick if the prior form line matches today, the other four use blue and red numbers to indicate the difference between the prior form line and today’s race. The colouring convention for these rows is the same as the BSP (Place) column.

Here is a news article about those features

The Online Race Guides are now packed with even more critical information to help you find horses to back and lay; but the latest release has also seen the addition of trading metrics to help you find horses whose odds will fluctuate within a race giving you the opportunity to back a horse at a higher price than you lay it at, thereby locking in profit whatever the outcome of the race.

Class is an important modifying factor during your selection Process and therefore it’s important for you to understand class movements for each horse compared against today’s race and this video shows you how can be determine class movements using the indicators in our race guides.

Colour coded WAX, PRB and PRB^2 on all screens as follows: -

So what is enhanced actual going?

In the process of creating the Proform speed figures each morning from the previous days results we at the same time, create a going adjustment.

Basically this is a positive or negative figure, which is how much the going at each course was speeding up or slowing down the horses per mile.

If the going adjustment (GA for short) was 0 then the ground at that course on that day was neither speeding them up or slowing them down, which on grass would equate to an Enhanced Actual Going of GOOD ground and on the A/W would be STANDARD.

If the ground was very bad at a course then the GA would be a negative value and the bigger the negative the worse the ground and this is where our Enhanced Actual Going comes up trumps.

Currently the general list of Official Gong descriptions range from Heavy through to Firm, however at the boggy end of the scale there are many more variations that could be used and to this end using the GA values we have the following extra Enhanced Actual Going descriptions.

We have added these into the form lines on the race guides when you hover over the official going, like this:-

So how can these GA's be used?

You now have the tools to find the right horses in the worst ground.