5 things you didn’t know about the Cambridgeshire 2016

The Cambridgeshire Handicap is open to horses aged three years or older and run on the Rowley Mile at Newmarket over a distance of 1 mile 1 furlong and the race forms the first leg of the “Autumn Double” with the Cesarewitch in October.

In this week’s blog post, we shine our statistical spotlight on the runners, riders and connections in one of the best handicaps of the season and a race noted for throwing up lots of horses who progress onto success at a higher grade.

For example, take a look at the image below which summarises the subsequent performance of the runners in last year’s Cambridgeshire won by Third Time Lucky. 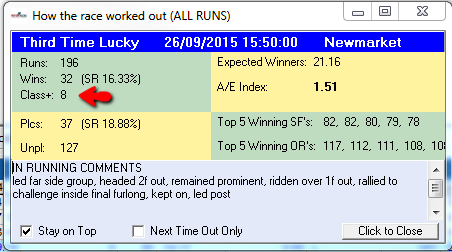 Below are the trends for this years renewal:

Top of the Market

With average field sizes of 32 runners, it’s a fair assumption that trying to sought the wheat from the chaff in a big field handicap may seem a thankless and time consuming task.

However, the wisdom of the crowd does a fair job of shortlisting contenders in the Cambridgeshire and the results of our analysis found that limiting your attention to the top 6 in the market identified the winner in 13 of the last 19 renewals.

And, if you backed all the horses that matched this criteria, so far you would have bagged a significant profit at Starting and Betting Exchange prices.

With an Archie score of 1.17, using this approach to shortlist contenders is relatively robust (<32% chance due to luck) so if you are pushed for time, focusing on the horses at the head of the market is probably a good place to start your form analysis of the Cambridgeshire.

Under this grouping, horses that ran at Newbury (5) and Doncaster (4) in their race prior to the Cambridgeshire perform 52% better than expected (9 wins from the last 19 renewals).

Notable mentions are horses that ran at Ascot (3), Goodwood (2) and York (2) last time out.

Trainer Mark Johnston has saddled 19 horses in the Cambridgeshire and so far, Tartan Gigha (2010) and Crosspiece (2005) are the only horses from his stable to have finished higher than 10th in the race.

Horses who finished in the first 4 last time out have won 14 of the last 19 renewals however, the bare result does not tell the whole story.

Half the total finished 1st or 2nd last time out although for value conscious punters, this stat represents no value, performing 16% below expectations.

The remaining (7), finished 3rd or 4th on their last start and with a collective A/E of 1.48 suggests that horses of this type as a population are under-bet in the market (over-performing by 48%).

When the age of the winner is taken into consideration, the scores on the door so far are:

Those who are looking for a bit of value should note 6yo’s in the race who perform well above expectation (A/E 2.55)

Older horses (aged 7 or above) as a population (63) are yet to taste success in the Cambridgeshire.