Is Big Bucks too old to win the World Hurdle?

In the next of our series of blog posts focusing on the forthcoming Cheltenham festival, we used the powers of Proform Professional to conduct an analysis on the ages of horses that ran at the festival since 1997. The result of our analysis is summarised in the table below: 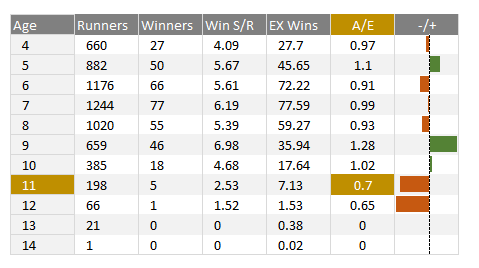 Again, the titles in the first 4 columns are self-explanatory.

The “EX Wins” details expected number of winners and is calculated from the probability of the horse’s odds in each race.

The “A/E” column details the (A)ctual verses (E)xpected statistic and is derived by dividing the “winners” column by the “EX Column” to arrive at a ratio or index.

This is shown visually in the final column, where the centre line represents normality i.e. 1.

So for example, since 1997, the performance of 5 year olds at the Cheltenham festival is 10% better than the norm, 9yo’s also perform better than expectation (28%).

In the table you will notice that the A/E column title is highlighted along with the intersection with horses aged 11yo’s  and is equal 0.7. This figure indicates that since 1997 11yo’s running in the Cheltenham festival perform 30% below statistical expectations. For context this figure does not include the performance of 11yo’s in the Cross Country and Fox Hunter races as these events are targeted toward older horses and their inclusion would skew the statistics.

Note the dramatic drop in the statistical performance (A/E index) of 11yo’s running in the festival to that of 10yo’s.

Note also the following horses aged 11 entered in the Cheltenham festival that at the time this post was written, are prominent in the betting in their respective races:

After reading this post, if you are in possession of an ante post voucher on Big Bucks are you sitting comfortably?