The Return of the Cheltenham Jedi 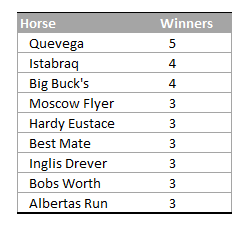 The table above lists horses that have multiple Cheltenham Festival wins against their name. There are many more in this unique role of honour!

In conversations the length and breadth of the United Kingdom and Ireland, possibly overseas, these horses will be held in high esteem. In some conversations they may even be worshipped like gods if the person won a bob or two cheering them home up the infamous Cheltenham hill.

Like the Jedi Knights of Star Wars fame, these horses had something within them, something that set them apart from their peers.

Possibly that something was previous Cheltenham Festival form; considered to be THE prerequisite for any horse hoping to do well at the Festival and often repeated by many a TV pundit or betting shop punter.

Well, with the aid of our industry leading database and profile tools, the Proform brain trust decided to explore this perception by analysing our data since 1998 for horses that had: 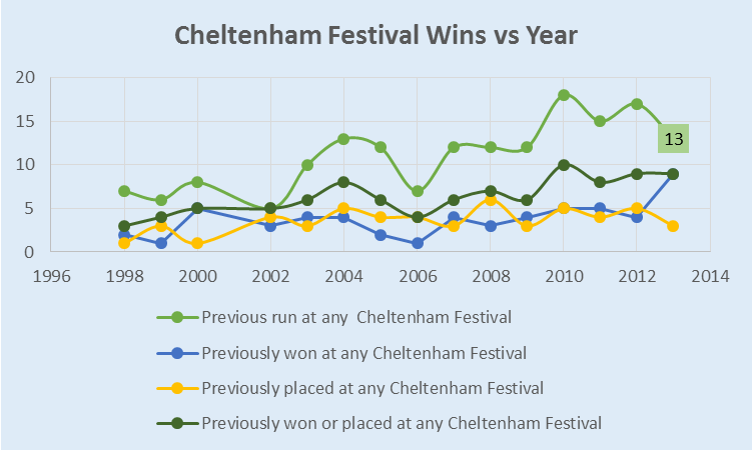 However, before you dive into the form database to pluck out horses with this trait running in this year’s festival, in 2013 there were 211 horses that had a previous run at any Cheltenham Festival. Unfortunately punting each one would have lost you £74.96 of your hard earned at Betfair starting prices to a £1 stake. 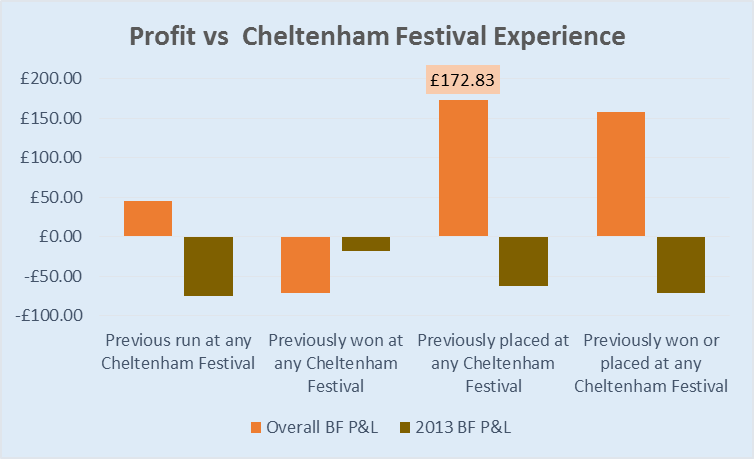 But as they say to cut a long story short, at last year’s Cheltenham Festival backing all the horses of each category would have been [ … … fill in your favourite losing euphemism here … … ]

It’s not all bad news though.

In total, 464 horses ran at the Cheltenham festival in 2013. By eliminating from consideration all horses with NO previous Cheltenham Festival experience you could have disregarded almost half of these entrants as non-contenders.

Another trick we can conjure up is to treat each of the previous Cheltenham Festival categories as a population and compare these against the wider horse population to arrive at an Impact Value.

We introduced the notion of (I)mpact (V)alues in a previous blog post so we won't explain it again here. Using the impact values for each category for each year of the Cheltenham Festival, we plotted the data as a 100% stacked chart to compare the percentage that each IV contributes to the total across categories to make it easier to visualise the data. 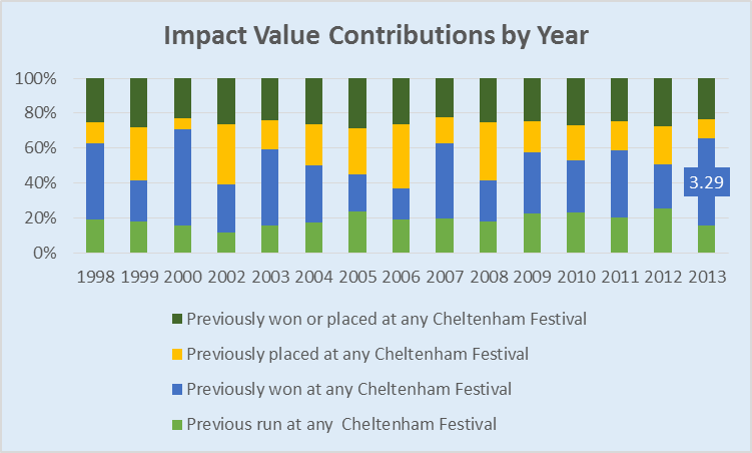 As highlighted in 2013, horses that previously won at any Cheltenham Festival were 3.29 times more likely to win or in A/E terminology, 38% better than statistical expectations.

Using this knowledge, at last year’s Cheltenham Festival you would collected from your favourite bookie on 9 occasions (from a population of 47 horses).

Unfortunately, an overall loss of £-17.76 at Betfair Starting Prices to a £1 stake would temper your excitement, however the power within Proform can be used in a vast numbers of ways to identify those profitable festival Jedi’s. In summary, our analysis does support the widely held notion that horses with previous Cheltenham Festival experience have a distinct advantage when returned to the festival.

However, you’ll need the Proform light sabre to cut through the data to identify the really profitable angles.