This year we have seen the wettest winter since records began in 1910 resulting in plenty of trainers deciding to take their charges straight to the festival without a post Christmas prep run before Cheltenham. This would seem to make common senses however how do the statistics stack up for those running off a break?

In the next of our Cheltenham focused blog posts, we use Proform Professional to analyse Days Since Last Run records over the last 4 festivals not only for horses running off a long break,but also those running off a short break.

The table above excludes debutants who are 0-9. Using the A/E Index represented in the last column as a bar graph, at a glance we can see that runners coming off a 14 day or less break before the festival have a poor record and those off a long break, 91 days or more, fare just as badly.

If we couple the 1-7 day and 8-14 day breaks and look at their combined results in the table above, with just 2 winners from 97 runners the figures are not good with just a 2% strike rate, which equates to 36% lower than expectations (A/E 0.64) .

When we review  data for horses coming off a break of 90 days or more, as you can see in the table above, 7 winners from 226 runners and a 3% strike is not inspiring especially when based on the prices they were sent off we should have expected 13.59 winners.  In layman's terms, horses coming off a long break are underperforming by 49% (A/E 0.51).

However that's just half the story because 4 of the 7 winners were the mighty Quevega and the other three were Bobs Worth last year in the Gold Cup, the well handicapped Salut Flo in the Byrne Group Plate of 2012 and the rejuvenated Balthazar King in the specialist Cross Country race.

* If we take out the exceptional horses of Quevega and Bobs Worth by removing the Gold Cup and Mares Hurdle from our calculations, we are left with these figures in the table below

Just 2 winners from 206 runners, a whopping 81% below the expected 10.66 winners that the prices they were sent off dictated!

Plenty of notable losers in those 206 runners include Time For Rupert and Cue Card both @ 7/4, Poquelin twice in Ryanair Chases @ 11/4 and 2/1, Menorah @ 3/1, Tell Massini @ 10/3, Somersby @ 4/1, Roulez Cool, Sunnyhillboy & The Package @ 9/2 and a whole host of other others who were found out off a 90 day or longer break. There will be plenty of these again this year with trainers not getting a prep run into horses because of our recent and record breaking wet winter.

However regardless of ground conditions on the run up to Cheltenham, the statistics suggest that a run with 15-90 days prior to taking part at the festival is best or most favourable !

The optimum break seems to be somewhere between 15 and 90 days or at least 2 weeks off track but not more than 3 months. The figures below are horses running off a 15-90 day break at Cheltenham broken down by year since 1997. 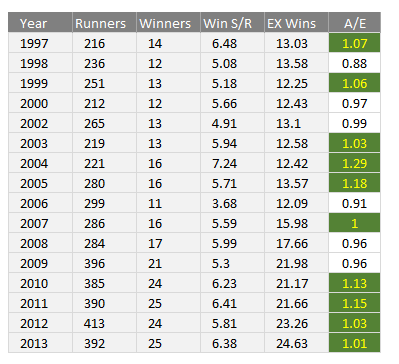 Based on the A/E  Index value of close to or above 1.0, the 15-90 days since last run  period has shown itself to be the optimal break for horses running in the Cheltenham Festival over the years.