Setting out your stall for the AW season

The curtain call for the turf flat season is upon us but we still have the artificial surfaces to carry us through the winter at Chelmsford, Kempton, Lingfield, Southwell, Newcastle and Wolverhampton. There are intricacies to a few races at varying distances across the venues, I would love to touch on them all (and can in time) but for the purposes of and in this article, we will examine just a few of the highly significant ones the data examination threw up.

The fibresand is associated with course specialists, it is equine marmite; they either love it or hate it.

The only race with no bend at the east midland’s venue is over five furlongs let’s see where does the draw favour? 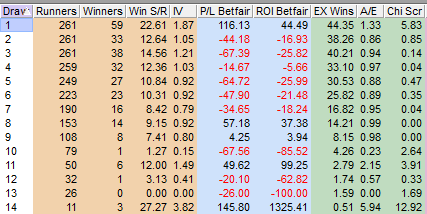 We can see from the unfiltered data that stall 1 has a strong advantage when comparing actual and expected winners.
Nobody likes dirt to be kicked back in their face so how does racing position impact this?

That bears out a couple of things; that the kickback is of course a factor and prominent racing styles are an advantage, so it is advised to avoid horses who are habitually held up.

It is a specialist surface, and does it take getting used to? Well we can see that those who ran on the AW last time out far outperform those who took alternate routes.

But this does not carry through as significantly to having had to race on fibresand last time up although it is certainly not a disadvantage!

So, collating all this into a system.
Drawn 1 over 5 furlongs, ran on AW last time out, pace rating 4 and higher.

(since August 2014 and introduction of new Tapeta surface)

Those who are familiar with AW racing will know that the outside draws need luck at Wolverhampton, therefore the record of stall 13 is interesting and if you must get a high draw let it be as high as possible!

What is more noteworthy is the poor record of stall 1 in comparison with the other low draw boxes.

Races with 6 or more runners

Firstly, to deal with stall 1. These biases are sometimes more pronounced in Handicap races (theoretically all is equalized with the runners before their draw is accounted for) and that is also true here, but Non-Handicaps also win less than expected

Perhaps unsurprisingly those that race more prominently from this inside gate fare better. Those who can grab the lead converting a respectful 10% of the time.

But attempts at predicting that from their pace rating value appears to shed no light with 8 and higher (normally front runners) performing below market expectations and are on average a shorter average price than those who do not habitually race towards the sharp end.

The horses to avoid at the 5 furlongs and 200 odd yards trip at “Wolves” are: Drawn 1 in 6 or more runner fields,

As we seen in the earlier graphic stall 2 also has a strong above average performance for wins. And broken down by race age limit we see that open company shows the strongest significance.

So, we have ourselves another micro system for Wolverhampton 6f contests. Stall 2, Max Age Limit = OPEN, 6 or more runners, Age <=4, Ran on the AW last time.

Being trapped wide on the long turn at Kempton can put those drawn high in the shorter contests at a distinct disadvantage depending on racing styles.

Looking at handicap races only henceforth and breaking it down by what distance the horse raced over last time we can see that having ran over 7f and further has been a greater indicator of future success.

While it is more advantageous to be prominent from the inside berth, horses with varying pace preferences, shown through their accumulated recent pace rating, perform generally above expectation.

The higher-grade handicaps have a poor record, class 2 and 3 shown 0/23 combined with only 4 places from that sample.

With no real empirical explanation as to why we see younger horses have a far higher strike rate than older ones from their larger sample size:

To develop this into a system what filters do we need?

The trend gets stronger the bigger the field

Taking those with the same filters but more than 10 runners and it becomes:

This system would have made profit on 11 of the 13 years since Kempton’s AW track was installed, with 2 years of miniscule losses.