The Greatwood Gold Cup is a Grade 3 National Hunt chase open to horses aged five years or older and raced at Newbury over a distance of about 2 miles and 4 furlongs.

It’s a handicap race which takes place each year in late February or early March.

Given its close proximity to the festival, only a few Greatwood Gold Cup winners have taken their chances at Cheltenham in March the same year with most opting for the Aintree Festival in April.

Performances of note for Greatwood winners that ran at Aintree in the same year are Big Fella Thanks’ valiant 4th in the Grand National in 2010 and Sound Investment win in the Grade 2 Old Roan Chase in 2015.

Newbury hosted racing yesterday (Friday) and the official going was Soft (Good to Soft in places).

With further Rain or sleet predicted to descend from the heavens on Saturday, it’s very likely current ground conditions will remain the same or become softer.

The Proform Ratings for the race are shown in the image below. 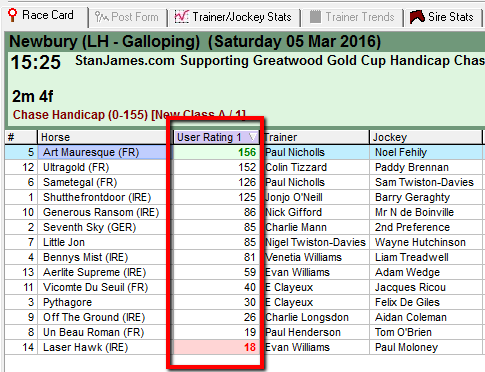 Using the Proform System builder to profile the historical trends for the race, listed below are the statistically significant positive and negatives for the Greatwood Gold Cup since its inaugural race in 2004.

[Ran at Newbury Last Time Out] 0 wins from 12 runners.

With reference to the shortlisted runners above, below are our comments for each runner interspersed with last run observations from Andy Gibson’s (Professional Punter and Racing Analyst):

Art Mauresque: 12th December 2015 - Cheltenham - He might be harshly treated having acquired his mark through winning a small field weakly contested novice chase. That said he should improve on this when he races on a faster surface.

Sametegal: 7th February 2016 - Musselburgh - He barely stays this trip anyway but his problems were surely added to by the late rain and the wind in his face plus the fact that he was wandering around in front for so much of the race. This was a poor race but the conditions were fairly extreme.

Pythagore: 11yo, career to date has been in France and arrives here on a three-timer

Little Jon: 1st January 2016 - Cheltenham - He has made far too many errors in each of his seven chases round Cheltenham and it is surely time for a Plan B. The Newbury Gold Cup in early March looks the obvious race for him given his recent course and distance win.

Off The Ground: Fell 2 fences from the finish on recent run, previous to that race, 2nd in a Class 3 Handicap Chase at Doncaster (27th Nov 2015)

Generous Ransom: 14th November 2015 - Cheltenham - He briefly showed before the fourth last but was soon beaten. He ran worse than I had hoped last time so maybe needed this more than expected. I certainly would not cross him off my list just yet. He does not hail from a yard that has as much experience at getting one ready compared with some of the bigger trainers.

Shutthefrontdoor: November 7th 2015 - Aintree - He ran perfectly well and will be busier on more important days in the future.

Within our formbook there are relevant columns which contain pace ratings for race horse which can help us anticipate how the running of the race will unfold. 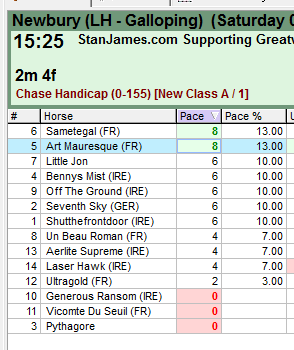 Historically horses with “Held Up” Running style have won on 3 occasions from 71 runners. -£43.76 profit, -61.76% return on investment at Betfair starting prices to a £1 stake. 47% below statistical expectations

Therefore unless there is a change of tactics, from our shortlisted horses, Generous Ransom and Pythagore are the most disadvantaged by the pace profile of this race.

Either Art Mauresque or Sametegal should make the running to the first fence and progress to lead the race in the earley stages.

On reflection, this is not a race to nail certain colours to relevant masts, however, given the fact his yard has an excellent record in this race it’s hard to ignore the Paul’s Nicholls trained Art Mauresque who can run this race to suit and Sametegal as the most likely winners.

However in our opinion the formers price does not reflect our doubts about his ability on the predicted ground conditions and as noted in Andy’s comments above, there are concerns about Sametegal’s stamina over the trip.

Of the rest,  at the age of 10 Bennys Mist will need to defy a career high mark and Little Jon will need to improve his jumping after a couple of indifferent performances over fences in his last two outings.

Ultragold will need to disregard an 11lbs rise in weights after a recent win, Off The Ground was beaten in lower grade and as a 10yo unlikely to show more improvement and Pythagore has landed some good prize money in France and if in the same vein of form on his debut run in the UK, could be one to consider even at the age of 11.

Faith in Generous Ransom requires forgiveness of poor recent runs and it may be the case that today’s race is Shutthefrontdoor’s prep run for another crack at the Aintree Grand National.